Just rolled in from a quick, spur of the moment run to Asheville on the Super Duke. I had a few days off, my friend Matt had a few days off…so “off” we went. I rarely take photos; I’m lousy at it, but I will let these few photos sum up the highlights of the trip.

I played with some luggage ideas so I could take the 690 on a trip to the North Carolina Mountains, but I wasn’t prepared for that yet, so I took the 1290. 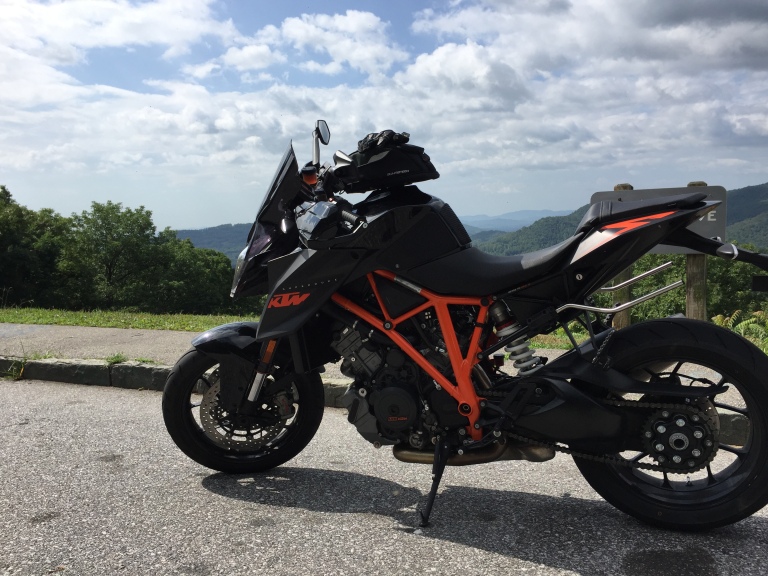 I got there a day before Matt so I hit up the City Bakery for my traditional morning breakfast sandwich, a Cheese Scallion Biscuit with ham, egg and cheese…good as ever!

As for other dining experiences, I have been on a very strict, calorie counting diet (have to be able to fit in my new Roadcrafter) and I think my stomach is currently shrunk to the point that it is nearly closed for business, so I spent a lot more time watching Matt eat, than actually eating…except where craft beer was involved. But I’m getting ahead of myself so here is some more food:

Matt ordered these at a downtown burger joint called Farm Burger. They are chicken pot pie bites. I have no idea how they ever came up with deep frying chicken pot pie filling, but they were pretty damn good! Matt suggested a county fair experiment gone wrong and I wondered if maybe they just had a lot of pot pie filling left over when they ran out of crust and said, “I know, let’s deep fry it!” Who knows, but it was a winner. He also had a burger, reputed as one of the best in town. I was stuffed from earlier (and the shrunken stomach syndrome), so I just had this little bucket of fries…haha! Oh, and a beer of course. Hi-Wire’s Hi-Pitch IPA. Delicious.

I don’t have any photos of the food we had at the Sierra Nevada brewery, but I had a very overpriced but good, cheese plate and we shared pretzels and beer cheese. To me, the beer cheese was some of the best I have ever had, and believe me, Louisville is full of beer cheese! Matt opted for another burger and gave it high marks.

While waiting on Matt to roll into town that first day, I availed myself of one of the 25 or so local breweries in Asheville, The Wedge. It was miserably hot and I needed to cool down. And I needed to eat something to soak up the beer. The bad news is that the Wedge doesn’t serve food. The good news is that they host food trucks regularly. The truck of the day, whose name escapes me, had very good Mexican fare. One of the bartenders walked in with a plate of tamales and began to moan with pleasure as he took a bite. That was good enough of a recommendation for me, so I headed out to the lot. The woman manning the truck, in broken English said, “Have no menu. Have tacos, burritos, tamales.” “Perfect…I’ll take the tamales.” They were, in a word, fantastic! And so was The Wedge’s Payne’s Pale Ale.

Now, we didn’t really ride a 1,000 miles in 3 days just to eat. Or even to drink, although I might be willing to consider that as an acceptable reason. We rode…to ride! My trip down was two lane back roads with a few larger state roads thrown in. Not a bad ride. Matt was under more time constrains and came from further away, so his trip down was all business. Getting to town the evening before, I spent a couple hours buzzing along the Blue Ridge Parkway.

On Friday, after visiting the wonderful BMW/KTM dealership in Asheville, Eurosport Asheville, we mapped  out a loop. We rode South on the Parkway until we had climbed to about 5,000 feet, at which point the wind began to blow heavily, the temperature dropped significantly and the sky began to spit rain. Now, to understand this quick dash of a trip you have to know that every direction we looked to ride for these past few days showed the same weather…wet…and hot. And that is exactly what we got. High temps, high humidity and rain…and storms…and some more rain. Good thing Matt had his custom GPS rain cover. 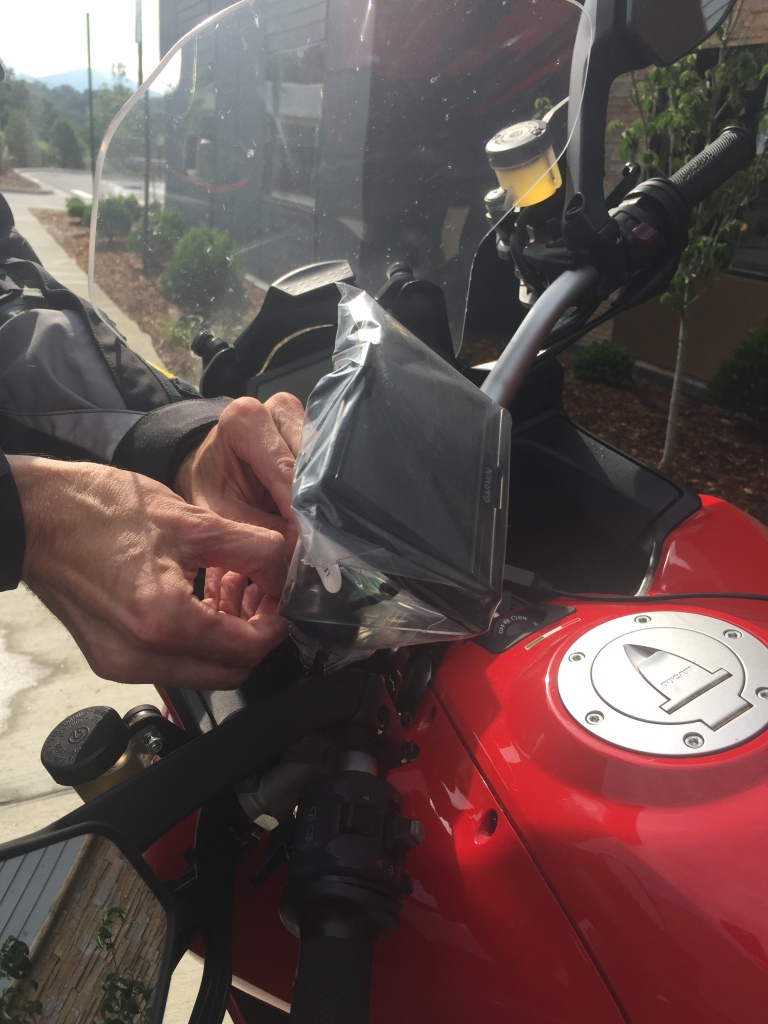 After running South on the Parkway, we picked up highway 215 and ran it north until it converged with 276. 215 was a tight, twisty downhill, which got us warmed up for 276’s climb. It was a great road with really nice, well paced mountain turns and switchbacks. Too busy riding and watching the road for leftover storm debris for photos…sorry.

I suppose I’ve spent at least 30 nights in Asheville on bike trips over the past few years. It is my “go to” place. Love the roads, love the food, love the unique culture…and love the craft beer. On all those trips I have never gone with another person. In fact, I basically never ride nor travel with another person. I’m an anti-social, hyperactive, unable to relax, do my own thing, impatient loner and I’m well aware of it. I prefer not to subject anyone to my annoyances if I don’t have to: my wife suffers enough for all. However, by tagging along with Matt I was able to have a unique experience that I would most likely not have partaken of on my own. Now I will make it a regular part of my trips. That being, taking the hotel shuttle downtown at night. I always rode everywhere. That meant avoiding downtown because parking is horrendous. It also meant being very careful about what types and how much beer I drank, as I have no intentions of ever getting on a bike while under the influence. Once I discovered that our hotel had a free nightly shuttle, Matt suggested we give it a go. It was perfect. And if we had not take the shuttle downtown we would never have gotten to witness this entertaining mob of dancers! 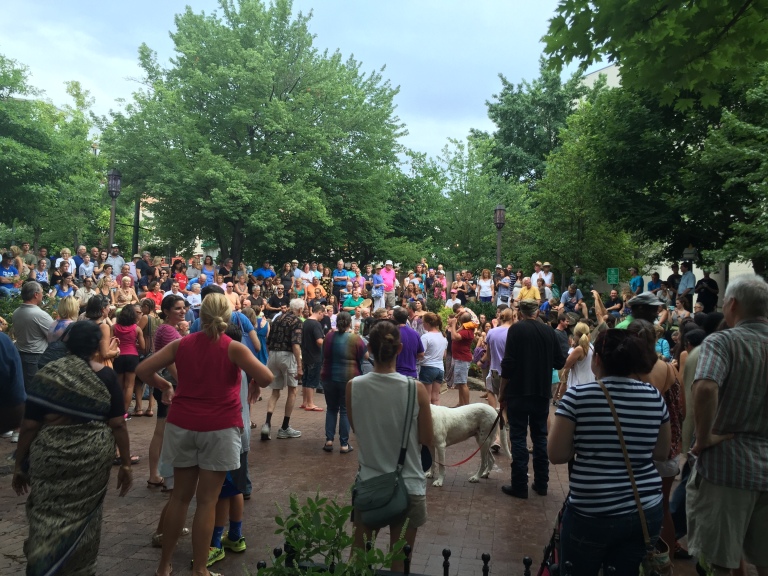 Every time I go to Asheville, I try to sample as much local craft beer as possible. Aside from the IPA at Hi-wire and the Pale Ale from The Wedge, I also had a tasty bomber from French Broad, Wicked Weed’s Freak of Nature Double IPA, and what became the highlight beer of the trip for me, a small batch double IPA at Sierra Nevada called Audition. So good that I bought a small growler to drink at the hotel later…but because I couldn’t resist the Freak of Nature while downtown, I could not hold any more beer…and ended up giving it away to the sweet and entertaining hotel clerk who took care of us each night of our stay. She was so thrilled that you would have thought I had given her a $100 bill!

Unfortunately I have a bad habit of thinking that when a trip is over, well, it’s over so you might as well get moving. I’m also an early riser by habit, so I packed up last night, rolled out of bed a little past 5 this morning and hit the road home. For several reasons I was in a hurry to get back, so for the first time since buying the Super Duke, I rode the Interstate. Never my choice of roads if I can help it, but today I gave in and took the easy way. And I made it in record time, at least for me: Asheville to my front door in Louisville in 4 hours and 52 minutes. This bike will haul the mail and if you are not careful, it will easily haul it with triple digits on the speedometer…oops!

Back home…and ready to go again.