I have waged war. It’s an ugly war. One that no one will enjoy, especially not me. I’m waging a war against myself. Well, more specifically, the fat that I have accumulated around my midsection lately. When I first moved to Louisville I actually lost weight. The job I took kept me hopping and I dropped 10 pounds right away. I was working second shift, walking many miles a night, going home to pizza and a beer…and I still lost weight! I thought I had discovered the million dollar secret to weight loss! Move to Louisville! Maybe it was something in the air, or the water, or maybe the food in Kentucky was just especially healthy. Well, um, no, that’s not it.

As time went on and my body got used the schedule, I began to pack the pounds back on. And I didn’t make any adjustments. I just kept on enjoying all the good food I was discovering in this town. Then I noticed most of my pants were getting too tight. My riding pants were really too tight. And then I paid a visit to the Dr. I had to have a check up to renew my blood pressure medicine and they subjected me to that awful test. Yep, the Lie Detector Test. You know, the one where they make you stand on a platform while they balance some weights and then, publicly and out loud, in front of God and everyone in the office, pronounce your weight; “167 pounds Mr. Shepherd.” Really?  “That can’t be right?” Why not just proclaim my credit score while you are at it. And the fact that I am nearly bald. And getting old and wrinkled. And my skin is sagging. And nobody really loves and aging, bald, overweight short guy! Traumatic.

Now, 167 pounds may not sound like a lot to you, but remember, I’m only 5’5″. The heaviest I have ever been till now was 163. I was miserable. I went on a serious diet and exercise program, I mean serious…no cheating…not even once. I got down to, are you ready? 139. And I stayed there for a long time. I kept going to the gym, kept lifting weights, kept eating right and kept losing fat. My pant size went from 34 to 28. I was in the best shape of my life. I was never going to be mistaken for a jock or model figure, but I actually had a guy ask me once if I was a body builder…ha! Pint sized. He must have just returned from the eye doctor where he had had his eyes dilated! My niece, on the other hand, just said, “Man, you look old!” All this happened at age 40…ancient history. Now I’m 53 and stiff, and heavy and, once again, miserable.

So, I have declared war…on Nord’s Bakery, and Plehns and the Pie Kitchen. I have sworn off of the wonderful pretzels and beer cheese at the Mellow Mushroom. And the calzone. Ah, the calzone! And Thursday’s Steal the Pint Night. And Angio’s supreme pizza. And Wild Eggs Kalamity Katie. And Toast on Market…anything from Toast. And the Garage Bar…oh, the ham and the pizza and the beer! And Doc Crow’s raw bar. Mammy’s in Bardstown? I’m not even going to Bardstown. Just driving past Mammy’s will cost you 5 pounds. Wick’s Strom is a distant memory, as is their baked spaghetti.  Bluegrass Burgers burger & fries, washed down with a cheap Texas Shiner Bock. None of my wife’s chicken gumbo. No bacon. Nooo! Not the bacon! Please and Thank You? No thank you. And the Holy Grale…no craft beer. No Country Boy. No West Sixth IPA. Aghhh! Just shoot me now; I’ve lost my reason for living! 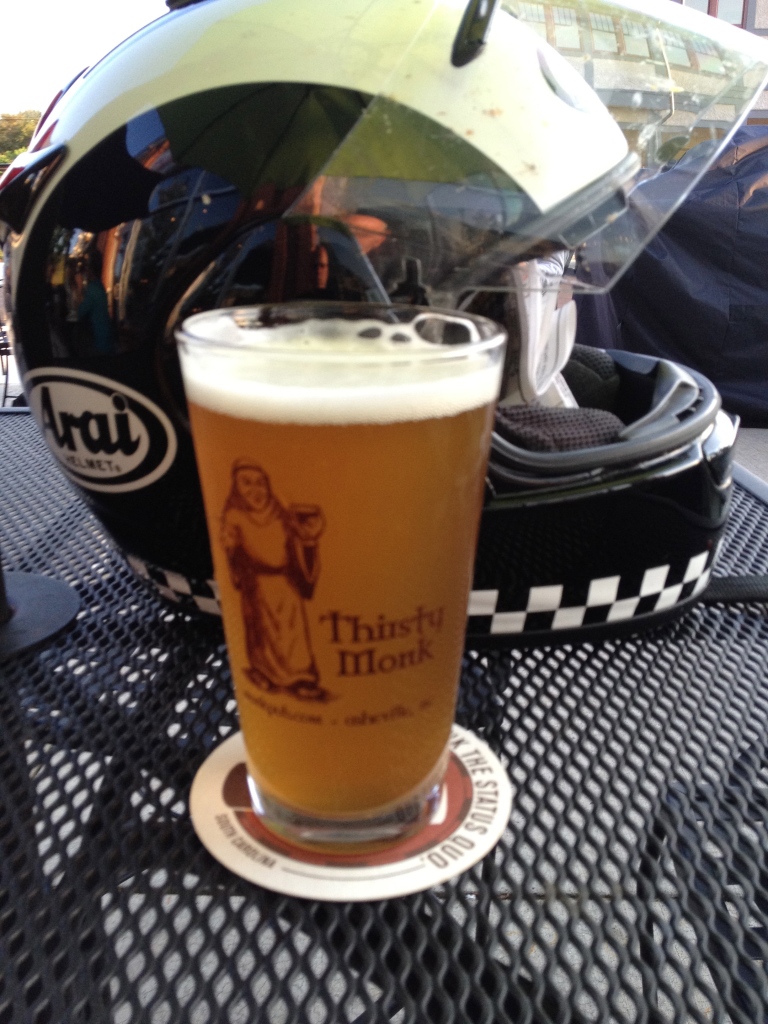 I would like to tell you that I’m doing this strictly for health reasons. That is partly true because I need to get better control of my blood pressure, plus I like to be active and take motorcycle trips, so I need to be in decent shape to enjoy those things. But vanity plays a part, even at my age. When I refused a Rice Krispie treat from a co-worker today, saying I was going to Florida soon and had to lose weight, he responded, “You can be fat in Florida.” True enough, but I don’t want to be! When Lori and I go to Florida, we spend the entire time on the beach…in bathing suits…that means no shoes, no shirt. I don’t want to disgust the entire state of Florida! And there is an economic issue at hand here also. I need to be able to fit into my riding pants soon or I will have to buy new ones.

So, my declaration is done, the challenge is on. I need to lose 17 pounds by May 10, the day I head for Naples. Wish me luck. And when I return? Look out Nords! and Wild Eggs and….

2 thoughts on “The Battle Is On”